How our weather works

We are going at it again.. the hurricane- ánd rainseasons have announced themselves.

For a couple of days already there isn’t a single breeze to be felt and the nights are filled with this beautiful sound of rain on our roofs. But its been long overdue. After days of visualizing tricks and analyzing my lesson methods it it finally seems to be happening.. there will be a breeze. With my high volume directional and lovely wave kite a enter the water. I’m all by myself.

All of the sudden the air cools down and everything darkens a bit. I look behind me and see some rainclouds coming my way and smile.

With rain comes wind… and… a rainbow!! I look at the point of my directional and see the beginning of the bow starting right at my surfboard. Wauw! No pot with gold but a blissfull feeling.

The weather is giving me a beautiful gift, but how does the weather actually come about?

How the weather on Curacao works?

The weather is actually nothing more then the state that the atmosphere is in and how it’s behaving. It can be warm or cold, it can move around, accumulations of watervapor can float around and there can be atmosperic accumulations/ thinning out, or in other words high or low atmospheric pressure.

The atmosphere closest to earth or the stratosphere is the most sensitive for weather fenomenoms. 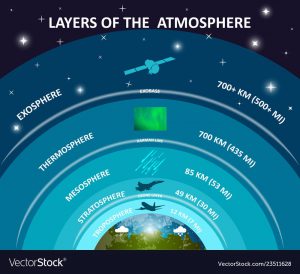 Meteorological phenomenons are observable events surrounding the weather and are expressed in variables of the earths atmosfere: temperature, airpressure, watervapor and mass flow.

On Curaçao We almost always have the constant Trade wind, except in the hurricane season or during the rainseason when weathersystems disturb our usual airflowpatterns. Thee Trade winds are also less powefull and consistent during the period of sept-dec.

Whom we have all this to thank to? The warmth of the sun!

Due to the surface consisting out of water and land the rotating earth does not heat evenly. This uneven heating of the earth produces pressure belts. There are 7 of them; The equatorial low, two subtropical highs and two subpolar lows and two polar highs.

These pressure belts combined with the Coriolis effect, the curved path of winds and the oceans due to the earth’s rotation, causes global wind patterns.

Hurricanes are rotating storms in the atlantic like typhoons are in the pacific.

The water needs to be at least 29°C and high pressure/low wind shear above the hurricane. Most hurricanes begin to form across the equator.

All the surrounding areas with high pressure push into the low-pressure area. Then the new air becomes warm and moist and rises also. As the warm moist air rises and cools off, the water in the air forms clouds. This whole system of clouds and wind spins and grows, fed by the oceans heat and water evaporating from the surface. Trade winds will then blow air across the equator and help push the storm along. 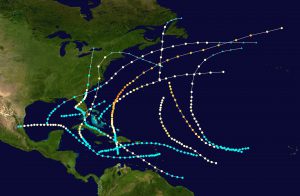 The hurricane will continue to move across the ocean and pick up strength if the water temperature remains above 29°C or 79° Fahrenheit and high pressure remains above the storm and there is moisture to fuel the storm.  Hurricanes are measured by windspeed and barometric pressure. The amount of windspeed needed for a storm to be classified as a hurricane is 119km/h or 74 mph and up.

As a general guideline September is the peak time for hurricanes because the ocean temperature is at its peak at this time.